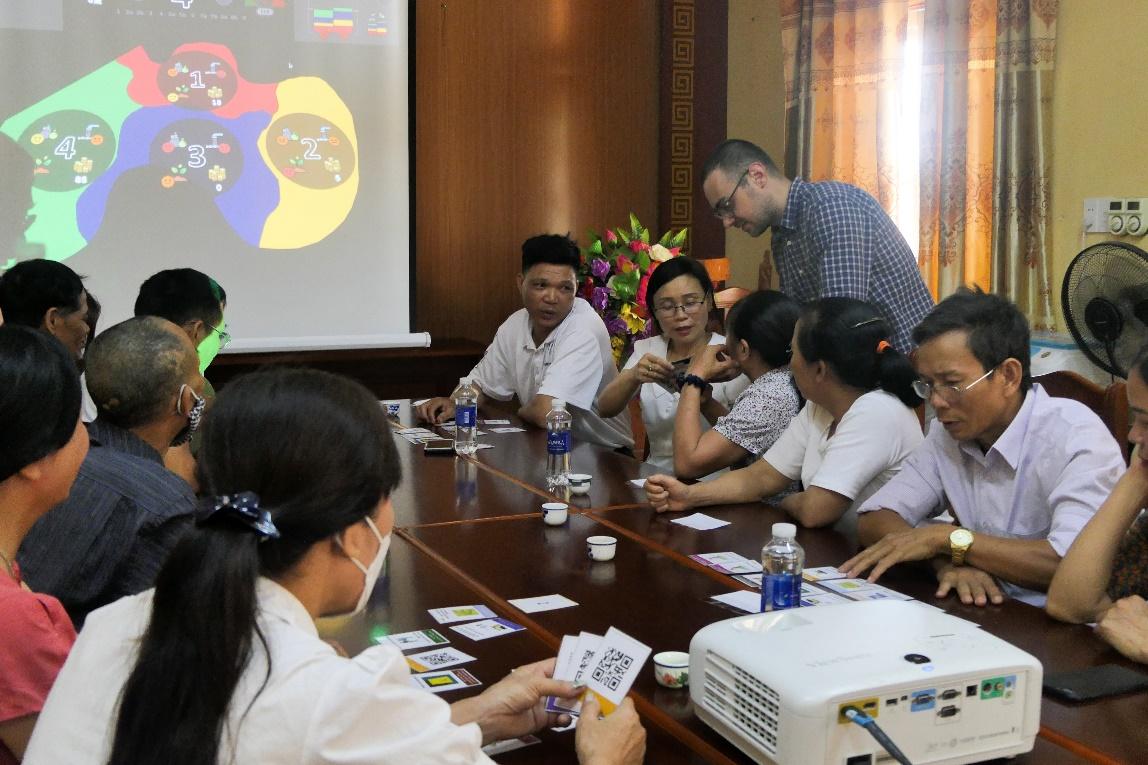 After several field trips to the area, one of the most pressing issues raised by different stakeholders in the Bac Hung Hai irrigation system is waste management.

In order to open the dialogue about this matter, ACROSS propose RÁC, an agent-based serious game using a concrete case study which is exemplary in terms of risk management: the waste management in the Bắc Hưng Hải irrigation system  (Vietnam). RÁC places the players (stakeholders, but also students) in the role of a village leader, who must ensure a sufficient level of agricultural production while minimizing both solid and wastewater pollution in order to maintain a quality label that is essential for selling agricultural products in the national market. The model was fully implemented with the GAMA open-source agent-based simulation platform.

This is a multiplayer game that aims at raising people’s awareness on the issue of domestic waste pollution and its impact on an irrigation system. It also gives room for innovative ideas for improvement and aims at fostering social dialogue between different stakeholders implicated in this pollution. The game follows the evolution of waste management and agricultural production in a fictional territory of a rural commune. This commune is divided in four villages, each facing specific issues due to their location either upstream or downstream. The choice of not using a real territory, but rather a fictional one with characteristics close to several territories in Bắc Hưng Hải, was made to more easily talk to players from different parts of Bắc Hưng Hải and to prevent some players from getting into trouble with the game.

The game is played by four groups of two or three players (8-12 players in total). Each group represents a head of village and takes decisions on actions that will have a local impact in order to reach a goal that is common to the four villages: maintaining the so-called EcoLabel certification. This fictional label, which directly refers to the VietGap quality label, is presented as required  for farmers to be able to sell their products to supermarkets. In order to maintain the EcoLabel certification, the commune has to get a minimal level of agricultural production and a limited level of soil and water pollution on its fictional territory, meaning that each village must meet these requirements individually so that the EcoLabel certification can be secured, collectively, for the commune. All players are then invited to not only improve the situation in their village, but also to coordinate their actions in order to influence and foster agricultural productivity at the level of the commune. With the support of the People’s Committee of Phạm Trấn, a commune located in the irrigation system of Bắc Hưng Hải, four game sessions have been organised:

The results showed that the game achieved a first objective regarding its potential to highlight the power games existing between players. It also allowed the players to discuss the subject of waste management, a subject that can only be discussed collectively. Future work in the short term will focus on continuing to organize game workshops to better assess the impact of the game on waste management coordination. Longer-term prospects include several improvements to the model and interface and improving the accessibility of the game to allow teachers and stakeholders to directly use the game independently.