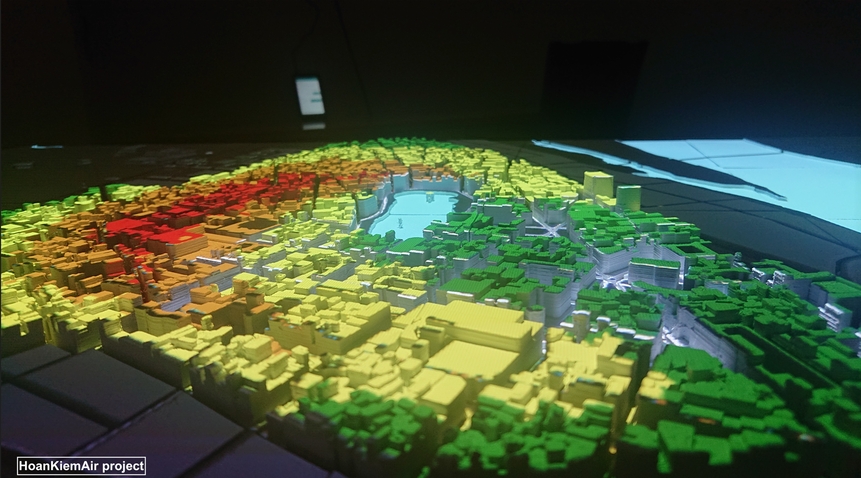 The development of permanent or temporary pedestrian areas, whether for leisure or to decrease air pollution, has become an integral part of urban planning in numerous cities around the world. Hanoi, the capital of Vietnam, began to implement its first area, around the iconic Hoan Kiem lake, a few years ago. In most cases, however, a road closure is likely to deport traffic to nearby neighborhoods with the consequences of intensifying congestion and, possibly, increasing air pollution in these areas. Because this outcome might appear counter-intuitive to most stakeholders, it is becoming more and more necessary to analyze, assess, and share the impacts of these developments in terms of traffic and pollution shifts before implementing them. In the HoanKiemAir project, we used the GAMA platform to build an agent-based model that simulates the traffic, its emissions of air pollutants, and the diffusion of these pollutants in the district of Hoan Kiem. This simulation has been designed so as to serve either as a decision support tool for local authorities or as an awareness-raising tool for the general public: thanks to its display on a physical 3D model of the district, people can effectively and very naturally interact with it at public venues. Although still in progress, the simulation is already able to reflect traffic and air pollution peaks during rush hours, allowing residents and developers to understand the impact of pedestrianization on air quality in different scenarios.

Populations are increasingly vulnerable to disastrous natural or technological events, as demographic and urban growth lead to greater exposures of goods and people. Large scale evacuation strategies are efficient tools for mitigating this vulnerability. Nonetheless, risks incurred during an important displacement through an altered environment are high: refusal to evacuate, crashes, direct exposure to the source hazard, riots, emergency services failures… In France a policy called Territoires à Risques importants d’Inondation (TRI) has emerged to deal with floods, in a first step to deal with the most frequent natural disaster in this country. Nevertheless, local governments and emergency managers lack prospective tools to assist their understanding and planning of large scale evacuations. ESCAPE aims at overcoming this major problem by the creation of an evacuation operational research system.

The core of our project is the tight coupling between Geographical Information Systems, agent-based multiscale modelling and computer simulation exploring tools. It will be deployed and validated on real case studies, so as to generate simulations realistic enough to allow their use by emergency managers for experimenting evacuation strategies.

By combining sources including territorial information (land occupation, transport networks, hazards expansion and intensity), demographic data (residential and transitional population numbers, age pyramid), a mobilityand traffic management simulator (cars, bikes, pedestrians, public transport), and by providing different evacuation strategies (partial or complete, by waves or synchronous), we will provide measures on evacuation time of various crisis zones, and will make explicit local and global constraints on these times. For that, we need to explore at multiple space and time scales the emergence of collective behaviours that would detract from planned strategies, and to devise solutions to dampen the consequences of these behaviours on the evacuation times. The ESCAPE team will build demonstrators to allow productive interactions with emergency services and remain reality-grounded for the whole duration of the project. These prototypes will allow us to precisely identify the stakes at play in each case study and the needs of the various managers.